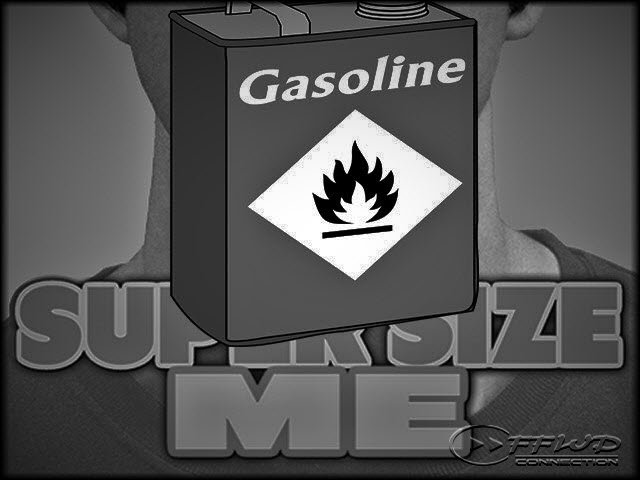 less is more...more or less

HOW MUCH PUMP DO YOU REALLY NEED?

This is most often asked...and using simple math, you can figure out exactly how many GPM (gallons per minute) you need for the job. Let's say your injectors are 2150cc's and you're using (8) of them. How do you figure out how many gallons per minute will be asked out of your pump?

This is the maximum amount the injectors will be able to squirt so thus, match your pump as close as possible to this number.

Note: This method is, of course sizing your pump based off of what size your injectors are. If you subscribe to the method of sizing the pump to the turbocharger's airflow capacity, that's a whole other can of worms to open. A little more brain wrinkles made, and it's the "Coke" in "Coke and Pepsi", but there is nothing wrong with either method in calculating the GPM requirements asked from your engine. You must use whatever method that you're comfortable with using. So for the sake of making a point, I am demonstrating here the simplest approach.

The #200060 Waterman with the .600" gearset we offer is a good "balance" that covers nearly ALL 4 cylinder big-power turbo car applications out there. The .600" gearset pump offers you plenty of margin for possible growth...but at the same time, not over-doing it.

IF A LITTLE MORE IS GOOD, ISN'T A LOT MORE EVEN BETTER?

For most things, yes. But with fuel requirements, it's not that cut and dry. It's nice to have some "safety cushion" when sizing up fuel requirements for your engine but go too far over the edge, and you're actually doing more harm than good. How so? Glad you asked...

The pump we offer allows for a 25% margin in GPM requirements using the example data above...which is perfectly fine. But let's say "so-and-so," says you need a 12 GPM pump with similarly sized injector CC's and quantity that is used in the above example. Oh, the car will still "run" but this recommendation is WAY overkill and will just unduly tax your fuel pressure regulator. It gets even worse...

Excess fuel that isn't gobbled up by the engine (simply because it can't) will just keep getting bypassed and re-circulated by your FPR...over and over again. This "merry-go-round" process makes the pump work harder, and thus, you are rewarded with increased engine load and hotter fuel as a result. Isn't that nice to know? I call that just a little too much hand-shaking.

M1, E-85, pretend gas...whatever...it doesn't matter. This methodology is true with all fuel types. The type of fuel only dictates what size your injectors need to be for proper AFRs all based around what horsepower you're trying to achieve...then you size your pump to the injectors.

Do the math. Numbers don't lie.

Let's put this into some retarded perspective here. If you were running a 12 GPM mechanical pump, and to size your injectors with this pump, you'd have to be running (17) 2150cc injectors! Yes....(17) of those bad boys. Or (8) 4550cc injectors. Take your pick. Whatever you need to do so that your wallet won't turn on you and kick your ass for being stupid. And if you know someone REALLY needing this much go-go juice with a 4 cylinder, we want to know about it.

Want to know something really crazy? This is assuming that same 12 GPM pump is spinning at 4000 RPMs...which chances are, it won't be through the traps. Try 5000 RPMs (this is camshaft speed), which equates to 10000 engine RPMs. That 12 GPM turns into roughly a 15 GPM flowing mechanical maniac. That's roughly an ADDITIONAL (4) 2150cc injectors needed to make this pump not frown at you. That's a new total of (21) 2150cc injectors or (8) 5650cc injectors. Yikes!

Of course, the above example is a ludicrous display of point making, but it does hold true.

SO WHAT ARE WE SAYING?

Do not oversize your pump to the needs of your injectors. For the most part, any pump larger than 8 GPM is simply overkill for 4 bangers boosted 60-70 PSI and running 8 big-assed injectors.

We're not saying oversizing simply doesn't "work" (as there are many racers already using MFP's larger than their requirements)...but merely giving you the information to make it work optimally. And optimum should always be your goal. It's also a big money-saver.  🙂

Do not aimlessly follow what others have used saying, "It works for me! My logs prove it!". Use your own noggin. It could work "even better" for you.